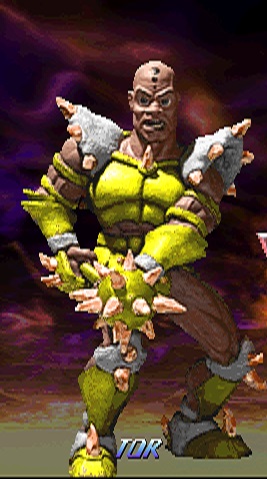 Name: Tor
Original Name: Unknown
Gender: Male
Avatar of: Armadon
Side: Virtuous Beasts
Turf: Tor's Crystal Place
Color: Light Green Armor
Worshiper Clothing: N/A
Tor is a playable character in Primal Rage 2. He is the avatar of Armadon. Tor is the tank of the group and has moves that can be very hard to avoid or counter. Tor, like all of the avatars, has a alternate selectable version on the character select screen which allows Kaze to switch between himself and Armadon by using the Rage Morph buttons.

Primal Rage 2 has win quotes for each character. These are all of Tor's win quotes:

These are the moves unique to Tor.

After defeating Necrosan, Tor uses his powers in combination with Armadon to bry Necrosan's alien radioactive meteor-egg under a massive mountain of rock. It wasn't until much later that Tor learned of Necrosans plan to terraform Neo Urth into a bleak alien landscape suitable for unknown inhabitants. Each day, Tor searches the skies for the invading armies of alien colonists. As the days grow warmer, and the polar caps melt, Tor worries that Necrosan's plan is still in effect. He and Armadon, dig up Necrosan's old meteor and encase it in Tor's Elemental Armor, and fire it up into the sun. One night, the skies became bright with the streaking tails of falling meteors. Terrified, Tor was faced with the possibility of fighting a hundred Necrosans without the help of his Elemental Armor. But when he cracked open the alien eggs, the slimy worm like creatures inside screeched horribly and choked to death in the cool Neo Urth air.