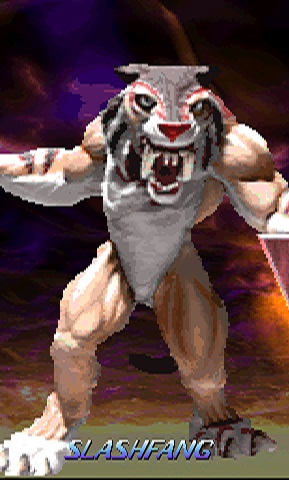 Name: Slashfang
Gender: Male
God of: The Hunt
Avatar: Xiao Ming
Side: Virtuous Beasts
Turf: Xiao Ming's Pad
Color: Light Peach with Red Stripes
Worshiper Clothing: N/A
Slashfang is a playable character in Primal Rage 2. He is a smilodon/sabretooth tiger. He is a new Dino-God introduced in Primal Rage 2. He is suppsed to be the original 7th Dino-God, Chaos is a human so he came before making him actually the 8th Dino-God. Slashfang is a balanced character and is well in close combat. His chosen Avatar is Xiao Ming.

Primal Rage 2 has win quotes for each character. These are all of Slashfangs win quotes:

These are the moves unique to Slashfang.

Having defeated Necrosan, Slashfang returns to the jungles and savannahs where his where his presence is needed by a hungry hunting tribes. The people of Neo Urth return to a simpler tribal hunting style of life. Each person works hard for the hunting community, and returns to the Urth what they take. The skills of each hunter are keen and deadly. But even so, there is peace as the nomadic tribes band together to discuss issues of conserving the environment they live in. Without greed or hunger, tribal conflicts are rare, and war is unheard of. The tale of the Great Cataclysm is told as a cautionary fable of greed and excess to the children of the tribes of Neo Urth.