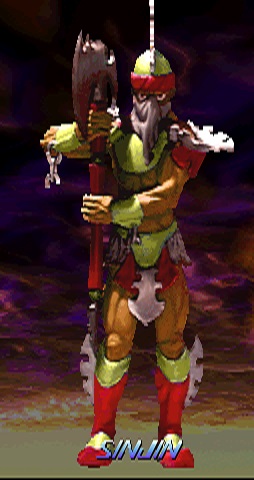 Name: Sinjin
Original Name: Unknown
Gender: Male
Avatar of: Diablo
Side: Destructive Dinos
Turf: Abandon All Hope
Color: Green and Red Clothing with Saw Blade like Pieces on Certain Areas.
Worshiper Clothing: N/A
Sinjin is a playable character in Primal Rage 2. He is the avatar of Diablo. He is a bit of a zoning character like Diablo, he is very unsafe on almost all of his moves allowing him to be countered easily when doing certain moves. Sinjin, like all of the avatars, has a alternate selectable version on the character select screen which allows Sinjin to switch between himself and Diablo by using the Rage Morph buttons.

Primal Rage 2 has win quotes for each character. These are all of Shank's win quotes:

These are the moves unique to Shank.

After defeating Necrosan, Sinjin wails in anquish. Great and mighty as he was, Necrosan was a mere mortal, and finally no match for Sinjin. Sinjin recalls the times when he was buried under the Egyptian pyramids for 2000 years, the many times he was dismembered and burned by witch hunters, and the centuries he blindly wandered the dark bottomless caverns of the seas--- always alive. And now with Necrosan gone, Sinjin will search for eons for another foe who may end his accursed immortality. As each day passes, his body's strength and vigor grow, but his face continues to rot. But one day his followers found a large cache of frozen heads from a mysterious cult from before the Great Cataclysm. Each century, he would renew his face with a head transplanted from this wonderful cult and lived youthfully and happily ever after.