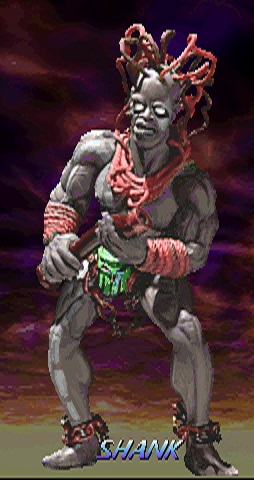 Name: Shank
Original Name: Chuck
Gender: Male
Avatar of: Chaos
Side: Destructive Dinos
Turf: Shank's Maze
Color: Grey skin with Pink hair and Accessories.
Worshiper Clothing: N/A
Shank is a playable character in Primal Rage 2. He is the avatar of Chaos. He has many zoning abalities as well as the abality to shrink his opponents trough the use of a bomb in which he can shoot it at three different lengths on the battlefield. It is heavily implied that he is not just the Avatar of Chaos but that he is Chaos himself in his human form. Shank, like all of the avatars, has a alternate selectable version on the character select screen which allows Shank to switch between himself and Chaos by using the Rage Morph buttons.

Primal Rage 2 has win quotes for each character. These are all of Shank's win quotes:

These are the moves unique to Shank.

After extracting Necrosan's precious alien seed, Shank can finally complete his 900 year quest to purify his DNA. However, Shank discovers that the evil Necrosan has already impregnated much of Neo Urth with the alien seed. Necrosan's victims mutate into maggot-like larvae before hatching into small wingless versions of Necrosan. Being the only genetic engineer to survive the Great Cataclysm, Shank uses the last of Necrosan's alien seed to produce a cure for Necrosan's Last Curse. Eventually, the madness of Chaos overcomes Shank. But his followers forever remember him as the brilliant geneticist who sacrificed his 900 year search for immortality to save the future of all mankind.