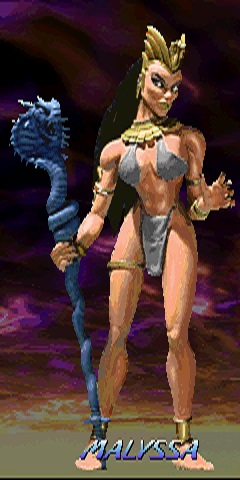 Name: Malyssa
Original Name: Veronica
Gender: Female
Avatar of: Vertigo
Side: Destructive Dino's
Turf: Malyssa's Altar
Color: Teal Cloathing and Gold Jewlery
Worshiper Clothing: N/A
Malyssa is a playable character in Primal Rage 2. She is the avatar of Vertigo. She is a zoner character much like Vertigo. Malyssa has the abality to shoot projectiles in the air diagonally much like Akuma, she also has the ability to shrink the opponent with her Hypnotic Blast. Malyssa, like all of the avatars, has a alternate selectable version on the character select screen which allows Malyssa to switch between herself and Vertigo by using the Rage Morph buttons.

Primal Rage 2 has win quotes for each character. These are all of Malyssa's win quotes:

These are the moves unique to Malyssa.

NOTE *:This symbol signifies that the move name is something I have come up with and is not the official name of the move.

With Necrosan and the Avatars defeated, there is no opposition to World Domination. Using her terrible mind control powers, Vertigo forces Malyssa to break the Great Spell of Binding, thus freeing the dinosaur goddess at long last. The Urth rumbles as Vertigo imbues Malyssa with the awesome magical energy to cast her spell. As Malyssa completes the spell, Vertigo realizes too late that the Bond of Imprisonment was not what was broken. But rather it was the Bond of Servitude between Vertigo and Malyssa! Long ago, while Vertigo was still weak, Malyssa had rewritten the ending of the spell to her own wicked design. Now strong as Vertigo was, she had used all of her power to free her most favorite slave! Free at last, Malyssa casts her spell to break Vertigo's bond of slavery on her people. She rules her magically talented people kindly, allowing each individual to persue freedom and happiness on her own terms.