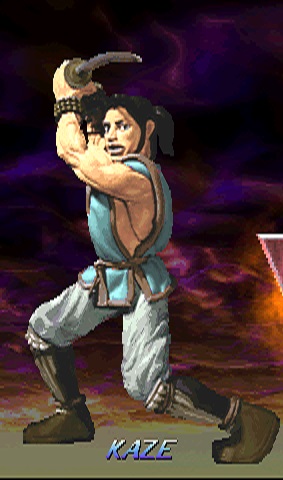 Name: Kaze
Original Name: Ronin
Gender: Male
Avatar of: Blizzard
Side: Virtuous Beasts
Turf: Blizzard's Haven
Color: Blue Samurai Outfit
Worshiper Clothing: N/A
Kaze is a playable character in Primal Rage 2. He is the avatar of Blizzard. He has the best combos in the game mostly due to the fact that he can freeze his opponents multiple times, he is the easiest character to get the 20 hit limit combo in the game. Kaze, like all of the avatars, has a alternate selectable version on the character select screen which allows Kaze to switch between himself and Blizzard by using the Rage Morph buttons.

Primal Rage 2 has win quotes for each character. These are all of Kaze's win quotes:

These are the moves unique to Kaze.

NOTE *:Will freeze opponent if empowered by the mist.

Having defeated Necrosan, Kaze returns to his peaceful meditation. His followers are in awe of this living testament to the power and strength of the human will. Pestered by his worldly fame, Kaze disappears from his home one day, leaving his most prized possession: his mystical ice blade. Each year, the winter's wind whispers the rough Blizzard Canyon of his disappearance sounding like a thousand followers chanting his mantra: Kaze, Kaze, Kaze. And each year on that day, his mysticl sword disappears from its final resting place beneath a cleat crystalline ice monument in Kaze's honor, and reappears just as mysteriously, the very next day.