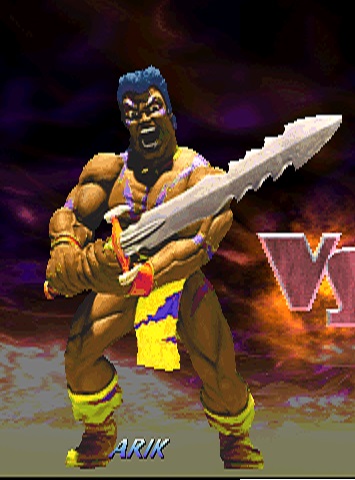 Name: Arik
Original Name: Sarek
Gender: Male
Avatar of: Sauron
Side: Neutral
Turf: Arik's Seawall
Color: Yellow Clothing and Purple Tattoos
Worshiper Clothing: N/A
Arik is a playable character in Primal Rage 2. He is the avatar of Sauron. He is a balanced character with long range, however he has no projectiles. He oddly has a DP has a quarter circle allowing him to easily anti air most jump ins. Arol, like all of the avatars, has a alternate selectable version on the character select screen which allows Arik to switch between himself and Sauron by using the Rage Morph buttons.

Primal Rage 2 has win quotes for each character. These are all of Arik's win quotes:

These are the moves unique to Arik.

NOTE *:This symbol signifies that the move name is something I have come up with and is not the official name of the move.

After exacting his revenge on Necrosan, Arik orders a day of mourning for his friends and foes. People travel from afar to Arik's kingdom to honor the slain warriors of this Great War. Impressed with Arik's compassion as well as his fierce determination, the people of other Shattered kingdoms elect to have Arik heal and rebuild their homes and lives. In his lifetime, Arik oversees the growth of Rosaunia to the largest, most prosperous, and most peaceful kingdom of Neo Urth. His kingdom began an unprecedented 1000 years of peace and presperity throughout Neo Urth. Arik was remembered as a wise and compassionate leader who began this new age. Centuries later, his battle with Necrosan became just a tiny footnote in this great man's history.